Why I have removed my WordPress blog from BlueHost India? 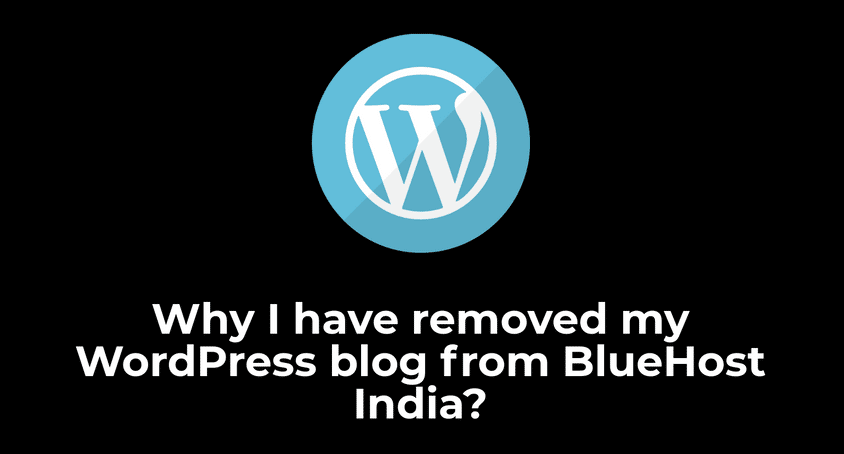 One of my blogs was on BlueHost India shared hosting for more than 1 year. I choose BlueHost India to host my site as I was aware of BlueHost US company that is focused for United host.

I am not saying that it was poor in quality, BlueHost India provides good quality of hosting, but comparing to the US BlueHost company, it is less effective. But I was also happy with that quality because of the faster speed and traffic handle capacity.

There are no doubt about BlueHost hosting quality. Their hosting is really good. But the Indian version of BlueHost has a lots of difference.

Though the speed was not faster like BlueHost, still BlueHost India had good speed. So I continued my blog on that hosting because of the good speed and for the traffic handling capacity.

I never faced any problem for more than one year on BlueHost India, But suddenly I had to face the difficulty. After that, I decided to stop using my hosting provider. So I removed my WordPress blog from BlueHost and purchased the SiteGround GrowBig plan for my blog.

The problem I faced on BlueHost India with my WordPress blog

Everything was running good. I didn’t think the little difference between BlueHost and BlueHost India as a big problem.

But one day I found “Error establishing a database connection” error when I tried to access my blog. The problem existed for almost 3 hours. After some time, my blog was accessible for a while and then again the same problem occurs.

The BlueHost India customer support and the technical team was failed to solve the problem within the given time and I found the problem was appearing again and again. Most of the time my blog was showing that error message.

I was aware that there is some problem happening during connecting my WordPress site with a database. So I tried to access the phpMyAdmin from cPanel. But it was not able to let me access my database through phpMyAdmin.

Sometimes my blog was accessible. When I was able to access my blog, I can also access the database from cPanel.

I gave some time to the technical team to solve this issue, but they were failed. At that time, my brother also searches about BlueHost India and found that many of the others also inform that BlueHost India is not the same as Bluehost. There were many negative reviews found against BlueHost India.

I was not aware of the fact that BlueHost US is much better than BlueHost India as I never used The BlueHost US. After a little investigation, I found a lot of users who informed about the differences between these two hosting plan.

So, at first, I thought to transfer my blog to BlueHost US hosting. But then Siteground came to my mind as I am already familiar with this hosting provider.

After I wait for two days, decided to migrate my blog to another hosting. Though it was just three month I renewed my blog on BlueHost India, but my blog is much precious than the money. I can’t get back my money. But making my blog live always was so important. So I stop thinking about the money and decided to purchase a new hosting plan from another hosting provider.

My experience after I migrate my site to SiteGround

The SiteGround technical team helped me to migrate my complete WordPress blog. I just gave them my WordPress database that I exported from my BlueHost India cPanel and the complete file and directory. After that, the SiteGround team does all that for me.

Off-course, I was already aware of SiteGorund hosting platform and their hosting quality. But after migrating my WordPress blog to their GrowBig hosting plan with managed WordPress hosting, I was really amazed by the speed and performance they provides to my WordPress blog.

At the time of writing this post, that blog is still running on SiteGround.

On SiteGround, my blog was loading so fast. I found that my decision was right to use SiteGround as the hosting for my blog. I am now happy with the hosting and recommend this hosting to you. I think SiteGround is the best shared hosting platform for WordPress blog.

« WordPress vs Blogger – which one is better to start your blog?
eCommerce website design and development cost in India »